So it’s nearing the end of the year and if you are one of the unlucky cosplayers that can’t afford the time or money to go interstate or better yet abroad for your cosplay fix then Sydney’s OZ Comic Con was your last chance to experience the crazy crowds, costumes and general convention madness that an event this size offers.

I for one was not disappointed, roaming the floor I encountered the usual heavy flow of characters filling out the four walls of the superdome.  Unlike Supanova, the one marked difference was that Comic Con only booked out the main hall and left the outside a kind of barren wilderness of food trucks and windswept benches.

Supanova, as much as we gripe about their epic all the way round the entire world queues and much stricter manner of dealing with con photographers and media DO provide a slightly more overwhelming experience. Filling an entirely separate hall with stages, artist stalls and the cosplay corner and keeping the main hall for the more commercial and corporate stands allowed one to dip in and out of either world depending on what you felt like at the time.

OZCC jams it all into the one space, while it is broken up into two distinct areas by a giant life size Tie Fighter ‘flown in’ by Disney themselves it still felt a little cramped.  It didn’t quite have the ability to awe you with its sheer size but instead wowed you with a focus on quality, from panels for geeks of all kinds to a long list of cosplay focused activities and competitions over on either the big stage or in Cosplay central itself.

Cosplay central had Ivy Doomkitty herself in the house which was a pretty awesome get and she was full of praise for our local artists and looked more than happy to mix with fans, Jusz cosplay also performed admirably as a host and educator running a workshop on the Saturday.

For anyone even remotely interested in the hobby this is a must attend event on the calendar.  For those after celebrity autographs and photos this year didn’t bring too many big names to our shores but the Q an A sessions for all of the guys and gals we did fly in were well attended.  KJ Apa from Riverdale got huge cheers from the girls eager to meet the heartthrob from New Zealand and Hayley Atwell commanded a full house when it was her turn to run the gauntlet of questions from enthusiastic Marvel Fans.

Some were left a little bewildered when she admitted she hasnt even seen all the Captain American films and floundered a little when asked anything comic book related but if someone steered her towards her passions, she suddenly perked up and we were treated to some hilarious storys about not just Chris Evans but also her theatre days and how she would love to play some of the more infamous male roles that Shakespeare has written. More power to her.

Along with film and TV actors we got the usual array of anime and cartoon voice actors who hosted their own panels and also comic book writers and artists, even greats like Nicola Scott of Wonderwoman fame and Dean Rankins ( The Simpsons) seemed happy to hang out and chat with fans.

For some its not spending hundreds of dollars on unique props, toys and collectables in the stalls that draws them in, its the rare chance to meet those who inspire them.  You can read interviews and watch Youtube clips all day but nothing beats standing across from a favourite artist and hearing their voice address you directly, that giddy feeling when your hero makes eye contact with you and the sudden rush of anxiety as you search for the right words to sum up your feelings about their work.

Having them express delight at a cosplay you spent a lot of time and money on is also strangely gratifying, as if for just a few seconds, you were a fellow co-conspirator in the world of make believe. Not just another civilian or potential customer but a kindred spirit who ‘gets it’.

Its moments like these and the many where you run into old friends and new and build on those relationships that this community seems to foster so well that makes Oz Comic Con one of my favourite weekends of the year.

I even caught the Championships of Cosplay on Sunday afternoon and my hearty congratulations go to ALT F4 for winning the national competition and we wish her all the best when she hits the states for the International crown. If anyone can bring home the jewellery, she can.

My only gripe would be that there is no easy way to look up the winners online to confirm the names you heard thrown out over a loudspeaker. It would be nice to be able to have a place you could go to keep up with the standings and follow the competition as it progresses through the year.

Also of note were the very cool Marvel walls thrown up behind the Tie Fighter, bold images as tall as a house leapt from the walls with art from the early days of comic book heroes right up to the present and it became the go to place for people to pose for photographs. 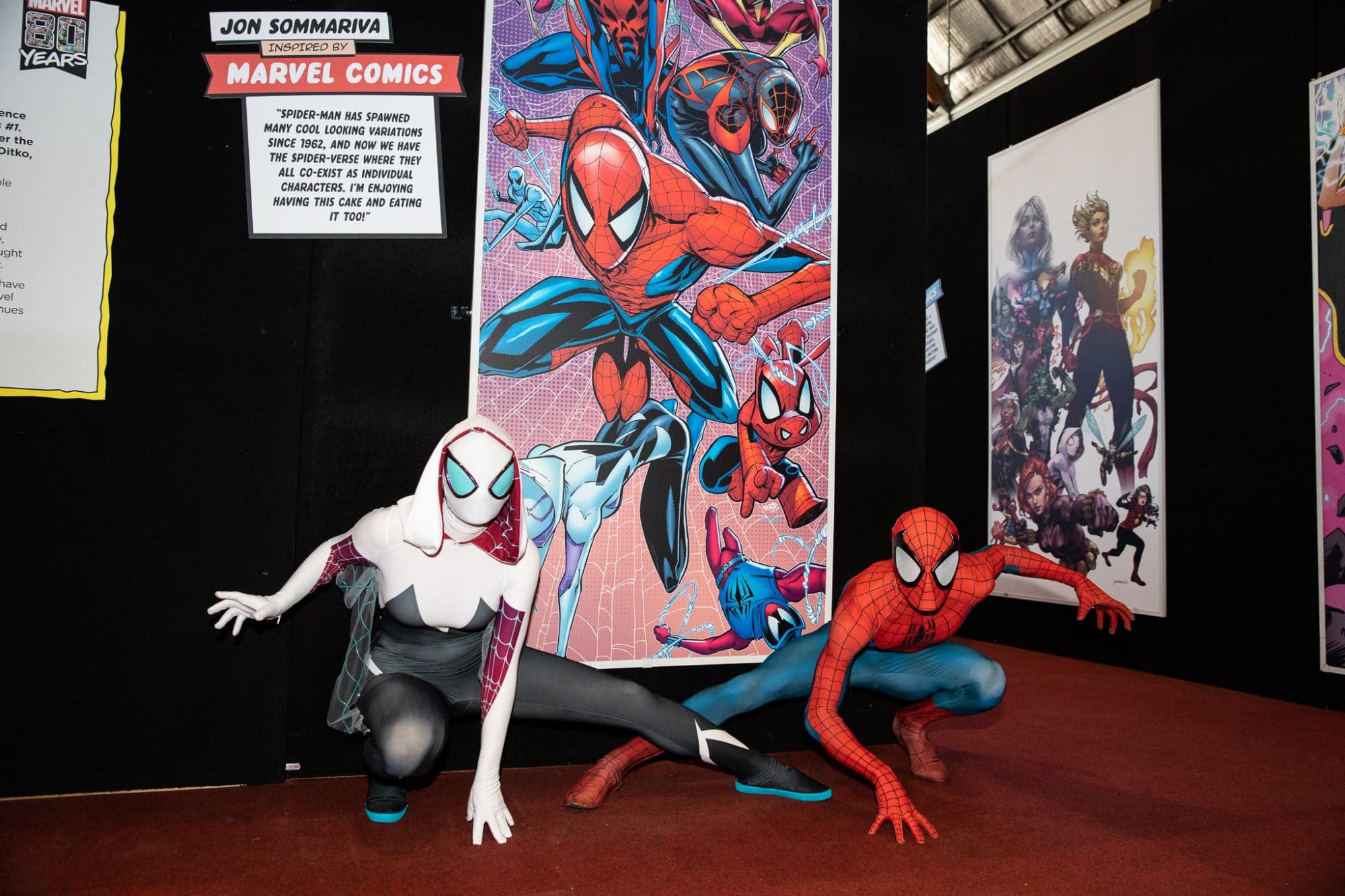 The Star Wars and Star Trek fandoms had their usual spots with plenty of new recruits im sure given how many young families got tempted by the dark side, posing with either Storm Troopers, giant life sized Taun Tauns or trying out the captains chair.

Kids were also tempted by the many activities on offer for the wee ones, drawing, arts and crafts, a gaming zone and even a battle arena sponsored by Tic Tok where kids could bash away at each other on a stage with foam swords.

Basically it had something for everyone if a little smaller than I would like and it definitely needs to get in touch with Aimee Smith   so she can run the same voice acting competition she hosted at Madfest as its a no brainer as both a spectacle and a chance for up and coming talents to shine.

All in all I would rate it as a successful event that achieved everything it set out to, I just hope it goes even further next year , now that they have settled into the space at Olympic Park they can only expand from there.

Either way I’m going to be there with bells on.

I sure hope to see you there too!

Check out more media in these galleries..

Welcome to Beyond Cosplay, your portal for news, stories and networking with other creatives across community. We're still under construction right now, bookmark us and check back soon to see the finished site!
-BC Team